Research and advice on methods of voting and election 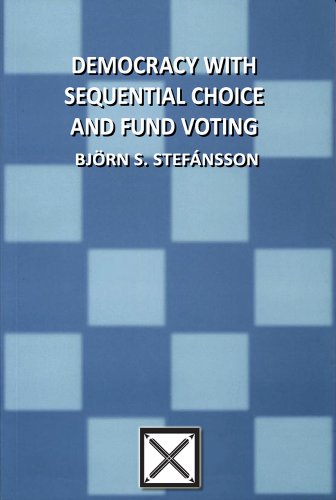 The term ‘democracy’ evokes the idea that under democratic rule the citizens, or the participants, must be free to express their views on matters that come up for discussion or decision-making. In the case where there is no unanimous conclusion there must be a means to arrange for group preference or to arrive at a decision reflecting the preference of individuals.

It is indeed a challenge – to philosophers, economists, sociologists, political scientists and others – to clarify what such a process might consist of and to assess what characteristics it should have. Since the publication of Kenneth J. Arrow's book Social Choice and Individual Values in 1951 much has been written about the subject. This is discussed by Stefansson–which is one of its merits. He emphasises that a given voting method should not deter anyone from submitting new alternatives but should rather act as an encouragement to do so. Furthermore, he states that a voting method should be flexible in order to give individuals freedom as to how much information they are prepared to provide, whether providing a thorough or more limited statement of their preferences. The voting methods should also enable as good utilisation as possible of the information supplied by individuals, and the process of arriving at a conclusion should be precise and technically unproblematic. It would also be most desirable if wasting time and resources due to repeated voting on the same issue can be avoided.

Finally the system should not directly encourage tactical voting.

Stefansson has more to say about the desired features of voting systems, but I shall not dwell further on the subject. My point is that Stefansson provides an excellent basis for evaluating the methods discussed in his book– Sequential choice and fund voting. This is done to a large extent by comparing–and to some extent by critiquing–other methods.

The theoretical value of this work lies primarily in the development of the two voting systems presented, sequential choice and fund voting, and by combining the discussion of their qualities, practical testing and utilisation. Let me explain this further.

Sequential choice is a further development of a method which requires each voter to rank the available choices. In a given ranking a selected choice receives as many points as there are choices below it on the list. At the end all the points for all the alternatives are added together. This method is usually referred to as the Borda count after the French mathematician Jean-Charles de Borda, a member of the French Academy in the eighteenth century, though actually de Borda was preceded by the great theologian and philosopher Nicholas Cusanus who had already in the fifteenth century proposed such a method. Stefansson therefore enters a broad continuity, and he has himself pointed out what can be learned from ranking methods from people who practice them, such as chess players. The value of Stefansson's contribution lies in the first place in the fact that his development of Borda's system, sequential choice, does not require exhaustive and strict preferences; Stefansson has found a well-grounded way to take account of all variants of preference relations—more or less complete preferences, with less or greater emphasis on what one wishes or does not wish. In the second place, it is of great value that Stefansson has pointed out various ways of utilising the method, e.g., for sounding out people's preferences, opinion surveys and real-life decision-making. And not least, he has demonstrated that he possesses considerable insight, inventiveness and energy to prepare and execute practical use in a wide variety of areas.

I should like to say a few words about the fund voting method, which can be applied where several matters are to be voted on, perhaps a long series of subjects. This method is truly an original contribution, a real breakthrough. I only know of one person who has dealt with something similar and that is the American sociologist James Coleman. As Stefansson says in his book, Coleman conceived his idea of “political money” at about the same time as the idea of fund voting was taking shape in Iceland. However, Coleman did not develop the method to the point where it was utilisable, as Stefansson has. As I remember from a seminar in Norway , which Coleman also attended, he got the idea from the US Congress, where the congressmen negotiate mutual support in cases of important votes. Congressman A may support congressman B on an issue important to the latter, and in return A receives the same support from B on an issue important to A, and so on. Stefansson has developed a method that operates in a similar way but no direct negotiations are needed for the system to work. To start with a person has a fund of votes that may be cast. During the actual voting the voter can then invest heavily–and in different ways–in issues that are extremely important to him, with the result that, if successful, he is left with less voting strength for issues that he feels are less important.

Here also Stefansson excels in his ability to see the potential for interesting and practical applications of the method. More specifically, he has demonstrated that fund voting, like sequential choice, can be applied in useful sounding out and opinion surveys. I am impressed with the breadth of Stefansson's utilisations, and I am impressed how courageous and bold he works with central—and at the same time complex–issues.

Stefansson has no peers in the field of group choice and voting theory. He is an able theoretician who has, in a most elucidating way, discussed Arrow's impossibility theorem with the author himself. But not all able theoreticians are endowed with creative and practical skills. Stefansson has this ability. He is an inventor and an implementer, and he has an understanding of society and politics that leads him to discover diverse and interesting potentialities for application.

In connection with his social and political insight Stefansson has also a keen understanding of the values that democracy can and should protect and develop. He is occupied with what can be done to check the incipient of tyranny of the majority and to prevent isolationism and polarization and instead to contribute to processes that are characterised by mutual respect and an open and searching attitude, that make possible creativity and well-balanced decisions.

I have wondered whether this type of originality is more easily generated and nurtured in a small country with idiosyncratic traditions and its own unique nature rather than in ponderous, competitive centres of learning. I cannot resist quoting the great Norwegian mathematician Arne Selberg of the Princeton Institute of Advanced Study, who once remarked about the background of the most important and original Norwegian mathematicians: “Most of them came from the fjords in western Norway.”

But enough of this! Now the question is where Stefansson's ideas can be properlytested. There may be possibilities in many places and under different circumstances–perhaps in some places with difficult conflicts and inferior methods of voting and resolving conflicts, and perhaps in other places because they have a co-operative atmosphere.

Many have noted the considerable conservatism that widely exists concerning procedures for voting–and more generally: aggregating methods. We have a strong tendency to believe that the traditional methods of our own society are the ones thatmust be adhered to – irrespective of what methods are concerned. I believe that it would provide the basis for a better choice of methods, and thereby also for a better process for making decisions, if more opportunities were created for experimenting on alternative voting and aggregating methods. More specifically, I hope that there will be opportunity for further testing and implementation of sequential choice and fund voting. Theoretical analysis and deliberation should go hand in hand with practical testing, as has been the case in Iceland–on Stefansson's initiative and under his direction.